Lightning and static triggered fires at production and disposal sites have become a major problem in the industry, causing damage to or loss of sites, lost product, lost production, cleanup and other problems. In many cases, losses are driving insurance premiums and deductibles out of sight. It seems like the problem is getting worse, although it may simply be increased awareness and better reporting.

There is one critical factor in tank ignitions that is often overlooked. That is tank venting. Venting largely determines whether or not there will be flammable vapours or gasses available for ignition. The formula for this is rather simple: gases = fire, no gases = no fire. 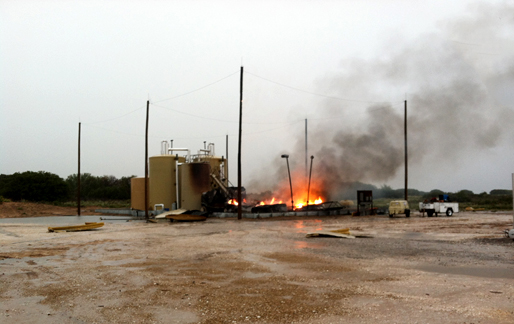 American Petroleum Institute API 2003, 5.4.2 points out that most tank explosions due to lightning strikes have been attributed to roof openings that have been left open and vents that were not protected by flashback devices, such as pressure/vacuum vent valves, and corrosion holes in tank roofs. It goes on to suggest precautionary steps, including ensuring that all hatches are closed (and not opened during lightning storms), ensuring that tank structures are in good condition with no holes or thin spots, providing and maintaining pressure/vacuum valves or flashback protection in all vents, ceasing tank movements during electrical storms, and providing inert gas padding in tanks.

National Fire Protection Association NFPA 780, 7.2.1.1, states that a primary means to reduce the ignition of flammable vapors is to minimize the presence of those vapors in locations that are vulnerable to a source of ignition from a direct strike, lightning electromagnetic pulse (EMP), or secondary effect arcing. 7.2.1.3 goes on to require that openings where flammable concentrations of vapor or gas escape to the atmosphere be closed or otherwise protected against the entrance of flame. 7.2.1.4 further requires that structures and all appurtenances be maintained in operating condition.

Unfortunately, these requirements appear to be more honored in the breach than in the observance.

LIGHTNING
There are three ways lightning can cause an ignition; the heat and current flow of a direct strike, secondary effect arcing, and electromagnetic pulse (EMP) arcing.

If lightning directly attaches to a tank, the strike may heat the structure above its melting point, dropping molten material into an area of flammable gases/vapors below it. Even if the tank material does not actually melt, the side of the tank opposite the point of attachment may be sufficiently heated to ignite gases inside. Structural lightning protection system design is based on intercepting any proximate strike and conveying it around the protected structure to ground. In the case of a tank, this protects the structure of the tank from the stress and heat of the lightning attachment. However, any stray gasses subject to the heat of the strike may ignite.

The entire site is a Class I, Division I area. It is not practical to install a lightning protection system outside of that area. Based on operator feedback, such systems, including catenary (overhead) wire and mast systems, are no more effective at controlling ignitions than conventional systems (please see introduction photo). They are expensive, difficult to properly design and install, and constrain site expansion and reconfiguration.

Secondary Effect.
Secondary effect arcing may be caused by the movement of ground charge towards the point of a strike. When lightning strikes a particular point on earth, that point is relatively vacated of ground charge. The ground charge in the surrounding area rushes toward the point of the strike. If that inrush of charge crosses a gap, it can arc. If that arc takes place within or near flammable gasses around the site, it could ignite those gasses.

EMP
The EMP radiating from lightning can induce high voltages in masses of inductance (metal masses) on the tank. Again, if the difference in potential between the metal masses overcomes the dielectric of the air or non-conductive tank between them, that difference in potential may be equalized through an arc. This effect may occur even over a relatively large distance. There have been reports of ignitions of sites by lightning ½ mile away.

Normal tank operations such as simply filling a tank or moving fluid can generate a static charge with sufficient voltage to arc and energy to cause ignition.

A spark gap may consist of two metal masses not electrically bonded together.

Ignition requires the presence of oxygen. Oxygen is obviously present outside a tank, but may also be present inside a tank. That is particularly true if the tank was recently drained or the fluid level lowered sufficiently to draw air into the tank.

SOLUTIONS
While lightning and static ignitions are not identical, they are sufficiently similar to suggest installing a system to mitigate both. The most obvious and basic solution is to limit the availability of flammable gasses for ignition. The 500 pound gorilla in the room is the fact that limiting explosive gases/vapors control of the atmosphere around the tanks is required by standards and recommended practices, but that many owner/operators simply do not comply. 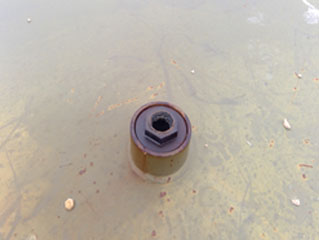 Venting varies, with a simple open hole in the top of the tank being the most basic. The next step up is the addition of a short standpipe atop the open hole. Both these methods allow the presence of vented gasses atop the battery that may, under certain conditions, be flammable. An improvement is to add a pressure/vacuum valve or flame arrestor. The next level of improvement is addition of a pipe manifold atop the standpipes to move the venting to the side of the battery. The situation may be further improved by adding a pressure/vacuum device to the end of the pipe manifold, or, preferably, a flame arrestor. The best way is to install a vapor recovery or other vapor eliminating system. Each of these designs progressively limits the presence of flammable gasses where lightning is likely to attach to the battery. Although a pressure/vacuum valve or flame arrestor still allows the venting of gas, they are recognized by the API recommended practice, perhaps incorrectly, as having value in preventing ignition. 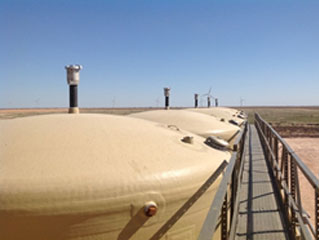 The expectation that any lightning protection system can stop all lightning damage is clearly hubris, and likely be the nemesis imposed by the jealous gods. API 2003, 5.1 clearly states that even when all known precautions are employed, prevention or safe dissipation of direct stroke lightning cannot be absolutely assured. In the case of indirect lightning currents, incendive sparks may occur in some segments of a system that use the best-known precautionary methods and devices. The methods discussed in API 2003, chapter 5 have been generally successful but do not offer a guarantee of success.

CONCLUSIONS
Knowing what we know about how these ignitions occur, is it worth installing a lightning/static protection system? Absolutely. If the site has not been expanded or modified and the system not disconnected, a properly designed and installed lightning/static protection system is remarkably effective at preventing ignitions. However, the presence of flammable gasses remains the Achilles heel of ignitions caused by direct strikes.

Although the prevention of accumulation of flammable vapor and gas is the single most important factor in the likelihood of ignition in the event of a direct or nearby lightning strike, it is a function of site design and construction and therefore beyond the scope of a lightning protection system. Safe and effective venting needs to be designed and built into the battery as part of the initial construction or subsequent modification. We urge all owner/operators to pass this information along to design and construction departments for consideration and action.

BOTTOM LINE
To stack the deck in your favor: install a properly designed system, don’t change, expand or modify the underlying site without modifying the protection system, don’t disconnect the system, do have the system inspected and maintained after any work on the site and at least annually, and control the availability of flammable gasses for ignition.