How Can Commercial Properties Be Affected by Nearby Lightning Strikes?

Effects of Nearby Lightning Strikes on Commercial Properties Everyone understands that lightning strikes are extremely powerful, sometimes even resulting in costly downtime for businesses. The damage that results from lightning strikes can not only be a danger to personnel, but can also cause damage to commercial structures. What many people don’t realize is that businesses […]

How does Lightning Master Protect Tank batteries? All existing facilities depending on their location and the presence of lightning, are recommended to be retrofitted with a lightning protection system. There are different technologies available but understanding which technology the best application is  important. This can lead to their assets being vulnerable to direct and nearby […]

How to educate your employees about the danger of lightning strikes and how to protect themselves. Lightning is a potentially dangerous natural force. Even though the incidence of lightning strikes is highly dependent on factors such as location and climate, no place on earth is particularly safe, especially in certain parts of the United States, […]

Risk of Lightning Damage to Commercial Facilities Lightning strikes are far more common than people realize. Lightning strikes occur about 100 times every second, and the United States experiences about 23 million cloud-to-ground strikes each year. If not planned for, these strikes can cause extensive damage to commercial and industrial facilities. For many corporations, the […]

What Do Lightning Master Field Service Technicians Look at During an Inspection? 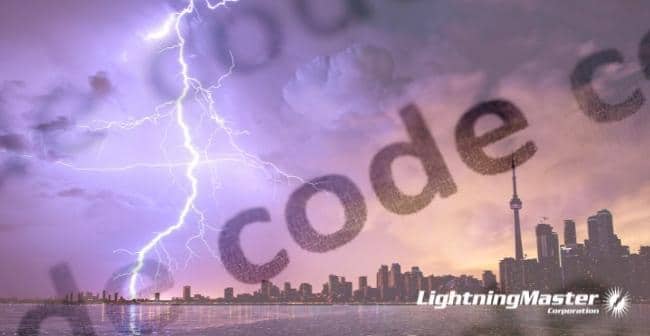 Is Lightning Protection Required by Code?

Lightning Protection Code—Safeguard Your Employees and Assets from Risks Associated with Lightning Lightning protection systems (LPS) for commercial and industrial facilities are not typically a requirement of national building codes. That said, losses due to lightning strikes and damage, whether direct or indirect, can run into the billions of dollars each year. The sheer power […]

EMP Protection: How Do You Protect Your Assets from EMPs Caused by Lightning Strikes?

The Electromagnetic Threat Posed by Lightning —An EMP Preparedness Guide Lightning is the most spectacular element of a thunderstorm. Lightning strikes release raw power in the form of electricity, light, and heat in a matter of milli- or even microseconds. While a direct lightning strike will cause significant damage to structures and electrical equipment, most […]

How is damage caused by lightning strikes categorized? Lightning is one of the most prominent weather-related risks that can cause property damage, downtime, and injuries. While the chances of getting struck by lightning are low, your facility has a far greater chance of experiencing damage from direct and indirect lightning strikes. You can never predict […]

Intense Lightning Activity Due to Hurricanes Generally, the crackle of lightning means one thing: a storm is coming. Surprisingly, though hurricanes are typically described as violent thunderstorms accompanied by whirling masses of wind and rain, they rarely produce lightning. Hurricanes swirl, they blow, and they flood, but seldom do they crackle. When they do, it […]

Protect Your Vital Commercial Systems from Power Surge Damage Many industrial companies lose millions of dollars every year repairing and replacing damaged equipment due to various electrical power damage concerns. While the obvious issues including vandalism and theft can be effectively limited through investing in security systems, some forms of damage like power surge damage demand more stringent management […]

How Can Commercial Properties Be Affected by Nearby Lightning Strikes?