Around the Oil Patch: Published June 11, 2017 in the Midland Reporter-Telegrams Oil Report 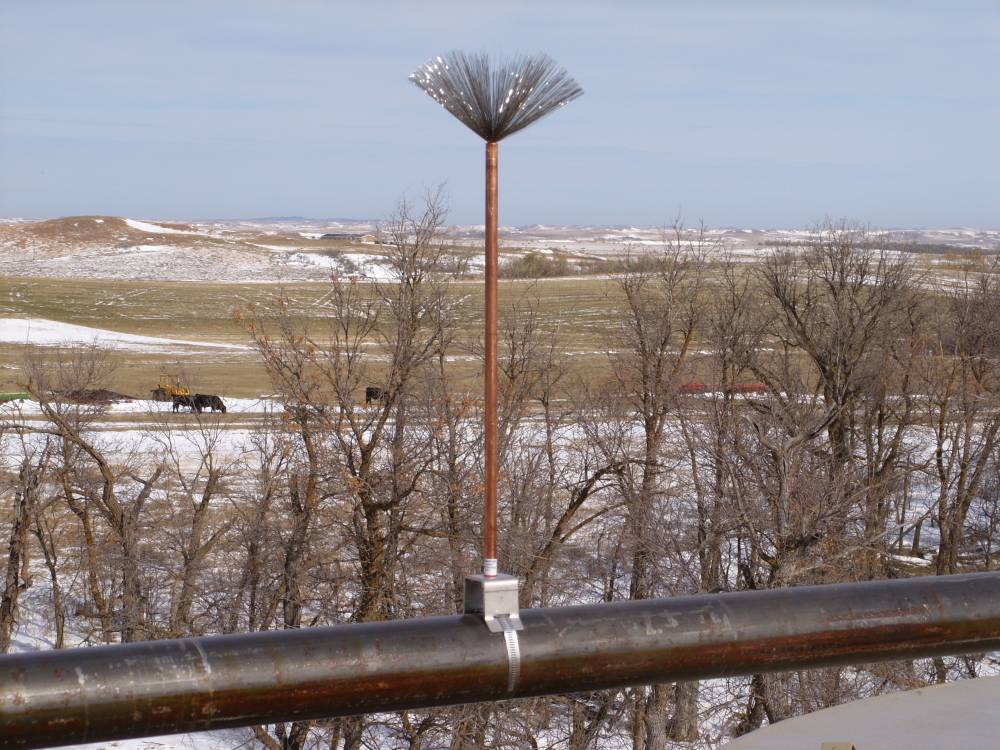 “It was a dark and stormy night.” Everyone including Snoopy has seen the damage lightning can cause wherever it strikes. When it hits an energy storage facility such as a tank battery the results can be disastrous, both in human and economic terms.
What is less obvious is that the extremely dry weather the Permian Basin is known for is also a breeding ground for static. Moisture in the air helps dissipate static charges—so when Basin humidity counts drop below 20 percent, to levels sometimes as low as 6 percent, there is even more danger. This kind of static is not confined to a recognizable event like a thunderstorm, says Lightning Master Founder and President Bruce A. Kaiser.
Because accumulated static charges do their damage when they build high enough to arc to an entity with a lesser charge, Kaiser says the best defense is to have all components on a site connected and grounded into a unified static control system. The unified system has several critical components.
Protecting storage tanks for external floating-roof storage tanks, “You need to bond the floating roof to the shell of the tank,” says Kaiser. This is a two step process. “One is, you need to have sliding contacts to handle the short-duration, high-energy part of the lightning strike.” Here there will still be a very short duration arc, too short to cause ignition. The second component of a lightning strike is the longer duration discharge—the one which, if not handled, is the one more likely to start a fire.
“To handle that you need a fixed conductor, called a bypass conductor.” This will quench any arcing from the sliding contact before the arc can start a fire.
In addition to the tanks themselves, Lightning Master installs structural lightning protection in the form of streamer-delaying (fuzzy ball) air terminals. “That reduces the likelihood of lightning actually striking the rim of the tank or the roof of the tank,” said Kaiser.

Protecting Production Tanks Most operators use fiberglass or a lined steel tank, both of which tend to build up a static charge. “The real problem with these is not a direct strike to the tanks,” Kaiser explains, “it’s a strike anywhere within a half-mile or so.”
The issue is something known as “secondary-effect arcing” or induced-current arcing. This can cause arcing between the bull plug and the thief hatch. The thief hatch is the most likely location for off gas to accumulate—and arc there can literally blow the top off a tank, or worse.
As stated previously, the remedy is to bond all pieces of metal together with conductors to help them stay at the same potential. This removes the opportunity for arcing.
The product inside the tank must also be grounded to the shell. All of this is within Lightning Master’s purview.

Once grounded, the system must be maintained. If a tank is moved, re-plumbed, or the conductors or clamps are removed for any reason, they must be reconnected or the system’s protection is lost.
But lightning is not the only risk. In dry weather wind and sand can also create static and a type of lightning that is just as dangerous. Lightning Master has advanced systems to handle these and more issues.